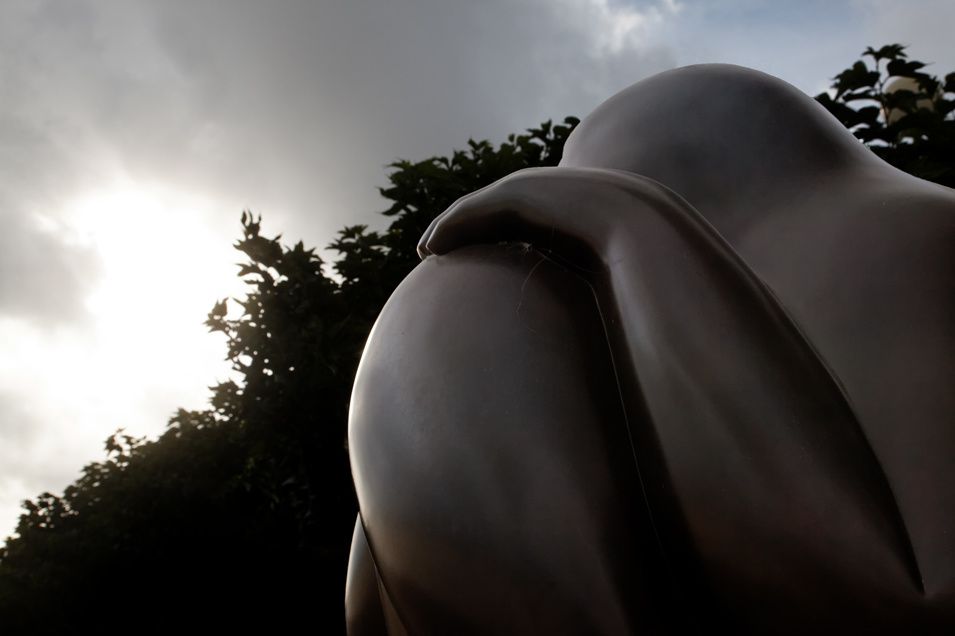 Jorge Jiménez Martínez, whose art-name is Deredia, was born on 4th October 1954 in Heredia, Costa Rica.  He started sculpting in the seventies creating pieces already bearing the signs and characteristics of what would become a constant throughout his successive works: the development of organic shapes modified by their environment, the force of gravity and growth; and the influence of pre-Columbian art.  In 1976 at 22 years old, a study grant brought him to Italy where he settled and from here started to travel around Europe, coming into contact with the main artistic movements of the continent.

Deredia graduated from the Academy of Fine Arts in Carrara and, between 1980 and 1986, he attended the Faculty of Architecture at Florence University.  The intellectual stimulations of those years profoundly changed his approach to his artistic work and, immersed in the Florentine climate, he extended his interest in the Renaissance period.  The intellectual fervor of that time pushed him to reflect extensively on the development of his own work. The perception of a globalised dimension of ‘being’ and the universe, forming the basis of his vision of life, developed and deepened thanks to a conscious return to the cultural origins of his own country.  In his work, he started to reflect the extraordinary creative influence received by observing the monumental granite spheres, produced by the pre-Columbian civilization of the Borucas. Those artifacts of mysterious primordial strength moved the sculptor towards studies as much of shape and material used, as of function and symbology derived from the sphere and circle. By taking on the art-name “Deredia” (a contraction of “de Heredia” = “ originating from Heredia”), the artist’s conscious return to his cultural origins was underlined at that time as the source of his creative and philosophical inspiration.

In 1985, Deredia realized the first Geneses, a series of works depicting distinct phases of the mutation of matter in space over time, and lay the foundations for the creation of his personal theoretical-artistic ‘system’: Transmutative Symbolism. He participated in the 1988, 1993 and 1999 Venice Biennale; this Venetian experience was marked by his meeting with the celebrated art theorist and critic Pierre Restany.  The friendship and collaboration born at that time would prove to be crucial to Deredia’s artistic and intellectual growth.

In 1999, the Fabbrica di San Pietro commissioned the sculptor to produce a statue of San Marcellino Champagnat, which would be placed in one of the huge scale Michelangelo niches situated along the external perimeter of the basilica’s left transept. The sculpture was inaugurated by Pope John Paul II in the year of the Grand Jubilee and, with this work, Deredia became the first non-European artist to present one of his works within the key monument of Christianity. In 2006, after an important personal exhibition held in Florence, he received the nomination of Correspondent Academician of the Sculpture Class by the Florentine Academy of Art and Design.

Since June to November 2009, Deredia carries out an important personal exhibition in Rome. In this occasion the Roman Forum, and more precisely the Via Sacra (Sacred Way) that passes through it, for the first time in history hosted contemporary creations.

The profound reflection over the archetypal form of the sphere, put into theory with the idea of Transmutative Symbolism, brought the artist to conceive La Ruta de la Paz: a colossal project seeking to establish nine monumental sculptural complexes, based on the cosmic principle of the sphere, in as many countries along the American continent from Canada down to Tierra del Fuego.

In forty years of work, Deredia has created monumental pieces for museums, external environments and public institutions in eleven different countries in Europe, America and Asia. He has held 34 personal exhibitions and over 100 collective exhibitions.