Astrid Kruse Jensen (born 1975) is a Danish photographer who specializes in artistic night photography where she brings out the mysteriously unreal, working on the play between artificial light and darkness. Her work has been widely exhibited in Denmark and abroad.

Born in 1975 in Aarhus, Jutland, Astrid Kruse Jensen began her education as a photographer in 1995 when she studied at the School for Photography in Aarhus. In 1998, she continued to study photography in the Netherlands at the Gerrit Rietveld Academy of Design in Amsterdam. She completed her studies in 2002 after a two-year course at the Glasgow School of Art's Fine Art Photography department. She then spent two years teaching at the School for Photography in Aarhus, spending short periods on artist residencies at St Petersburg, Russia, and Hafnarfjördur, Iceland organized by the Nordic Institute for Contemporary Art.

In answer to a question on her night photography technique, Kruse Jensen explains: "In recent years, most of my work has been carried out at night. This is due to the fact that, at night, I can manipulate and interpret the surroundings while the photograph is being taken. I can underexpose or over-emphasize certain areas of the picture. Normally I use the light available at the site, and the hypernatural colours are a result of the very long exposure times I can use when I photograph at night. With long exposure times, I also relinquish full control over the light and colours, and I think it is interesting that part of the process is a matter of chance. My work is analogue and the pictures are created without any additional manipulation. The level of detail in even the darkest photographs is the result of the long exposure time."

The Hypernatural series (2006) presents photographs of Iceland's geothermically heated swimming pools. Her pictures are taken at night, in the absence of people, the rippling water conveying a feeling of silence and emptiness. She makes excellent use of the artificial sources of light which appear to come in from another world. The pools do not appear as they would to the naked eye but rather as a zone of artificial imagery as if they have a life of their own once night falls. Hypernatural represents a meeting between the alien and the familiar: the alienation between humans and nature, between the reality of the spaces depicted and the fiction the images represent.

In her recent collections Imaginary Realities, Parallel Landscapes and The Construction of Memories, Kruse Jensen attempts to question traditional concepts of reality and nature, casting a new, disconcerting light on familiar subjects. Her photographs transform them into parallel realities which continue their existence in the observer's imagination. There is also a temptation to think about the background to her photographs, always hidden in the dark. Rather than telling a story, Kruse Jensen suggests a multitude of possible scenarios including psychologically loaded situations which go beyond the bounds of a narrative.

The paradox in the work of Astrid Kruse Jensen is her ability to use photography as a means of bringing reality together with the imaginary. She uses her camera as a tool for telling stories. Picking on quite ordinary subjects, she brings us images which suggest more than they actually show, allowing the beholder to interpret their full meaning. 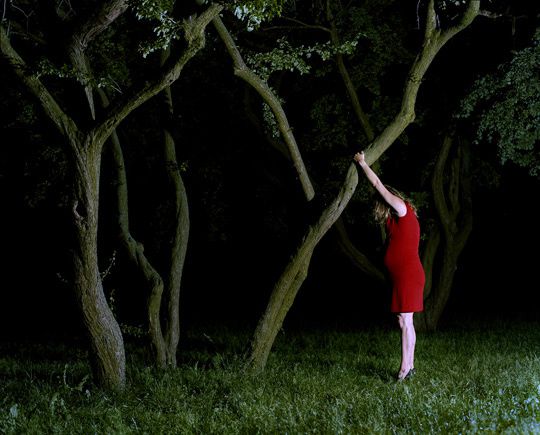